Call and put options are two important trading concepts to understand and leverage when trading options. If you’ve previously tried to learn about puts and calls but were left confused, here we clear up that confusion, provide memorable examples, and leave you with a solid understanding of these trading techniques.

Do you want to have the potential to enjoy double or even triple-digit returns on a per-trade basis, with less risk than how most people trade?

It’s possible when you know the safe way to trade options. And if you’re serious about making as much money as possible with your portfolio, then you really need to be trading options. 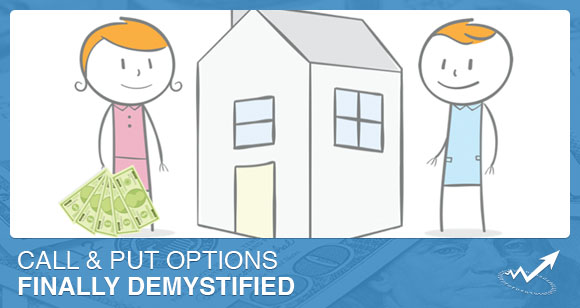 And if you’re not already doing that, it’s probably because you either don’t understand how to do it properly, or you think it’s too risky. So instead, you probably just continue to do what you’ve always done, and just trade a stock or exchange-traded fund directly. That’s what most people do. But most people also are net losers when they trade the markets.

Plus, trading a stock directly can eat up a healthy chunk of your portfolio pretty quickly. So, you end up having too much of your money exposed to too much risk.

But if you understand just two simple options trading concepts, you’ll be able to enjoy the tremendous leverage that options trading offers. It’s a way to tap into the huge profit potential of the stock market without having to come up with a lot of money to purchase shares of a company’s stock.

You simply put down a tiny deposit to trade those same number of shares. And because you risk nothing more than the small deposit amount, your risk actually plummets. This is why options trading is much less risky than trading a stock directly.

And if you’ve tried to understand call and put options in the past, but are still confused, you don’t have to worry. That’s because you’re about to learn how these concepts work in a fun and simple way – something that you’re not likely to forget.

How? Instead of having some trading geek with a PhD try to explain it to you with confusing charts and graphs, you’re going to learn about from two cartoon characters, Suzie & Sammy.

Suzie is selling her house for $500,000 in a neighborhood that has a nearby parcel of land that is for sale as well. There are two parties interested in the land.

Peter plans to develop the land into a beautiful park and bird sanctuary, and Harry plans to build a low-cost housing development.

Now Sammy comes along and is interested in buying Suzie’s house for a cash deal, but he has a problem – he won’t have the cash available for three months. So he’s of course worried that the house will be sold to someone else in the meantime.

So he decides to offer Suzie $5,000 (the option premium) right now if she’ll take the house off the market and give him the option (a “call option”) to buy the house for $500,000 (the “strike price”) anytime within the next three months (the “expiration date”).

Now three things could happen in this story.

In Scenario 1, Peter buys the nearby parcel of land to build the beautiful park and bird sanctuary. This, of course, will increase the value of Suzie’s home to say $600,000. In which case, Sammy will be very happy to exercise his option to buy the house for $500,000. In Scenario 2, Harry buys the nearby parcel of land to build the low-cost housing development. This, of course, will decrease the value of Suzie’s home to say $400,000. In which case Sammy will not exercise his option to buy at $500,000 and just walk away from the deal, having lost only $5,000. Then there’s Scenario 3, where neither party buys the nearby parcel of land. Suzie’s house is still worth $500,000 and Sammy can elect to exercise his option to buy the house for $500,000 or not and simply walk away from the deal, losing only $5,000. In effect, Sammy is controlling a $500,000 asset for three months for only $5,000. No matter what happens during that time, the most he can lose is $5,000. Suzie, on the other hand, is happy to take the $5,000 as she had no guarantee anyone else would buy the house at her asking price nor did she feel the nearby parcel of land would sell anytime soon. Here’s a footnote to the story. Depending on the circumstances, if Suzie felt she was likely to attract another buyer in the near term, she would have demanded more than $5,000 from Sammy to take the house off the market for 3 months. Likewise with call options, the more the underlying asset is perceived to appreciate, the higher the premium demanded by the market for the call option.

So now let’s define this in trading terms and look at an actual example trade. Now let’s look at how put options work by revisiting Suzie and Sammy. Sammy owns a truck worth $40,000. He is concerned that his truck may be damaged in an accident or stolen. So, Sammy decides to buy a zero deductible insurance policy (a “put option”) on the truck for the full amount of $40,000 (the “strike price”) from Suzie’s Auto Insurance Company.

Suzie charges him $1,500 (the “option premium”) for a one-year policy. One year being the “expiration date”.

Now three things could happen in this story. In Scenario 1, Sammy’s truck is not damaged or stolen during the years, so Suzie keeps the $1,500 premium. Sammy is OK with “losing” the $1,500 for the protection it provided him for the year. In Scenario 2, Sammy’s truck is damaged in an accident, requiring $10,000 in repairs.

He “exercises” his insurance policy (his “put option”) by filing a claim, and Suzie pays him $10,000 for the repairs as agreed. Sammy is happy he purchased protection for this possibility. In Scenario 3, Sammy’s truck is stolen. He “exercises” his insurance policy (his “put option”) and files a claim, but this time for the full replacement value of his truck, and Suzie pays him the full amount of $40,000 to buy a new truck. Sammy, of course, is very happy he purchased protection for this possibility.

In any case, Suzie is happy because she sold many such insurance policies (different “put options”) to other drivers, most of which never filed a claim (or were never were “exercised”), providing her with a net profit.

And here’s a footnote to this story. If Sammy had a poor driving record, that is more risk to Suzie, so she would have charged him more than $1,500 for the one-year insurance policy. On the other hand, if Sammy had an exemplary driving record, Suzie could have charged him less, as the risk would be lower. Likewise with put options, the higher the perceived risk, the higher the premium demanded by the market.

Let’s look again at a definition and a trading example. For example, if a stock is trading at $50 and you think it’s going to go down to $40, you might buy a $45 put option for say, 20 cents. If the stock dropped to $40 that would allow you to sell the stock at $45 even though it’s valued at $40, netting you a $4.80 profit on each share. On the other hand, the person that sold you the put would be obligated to buy the stock from you at $45 at a loss of $4.80. If the stock never drops below $45 by expiration date, the put expires worthless and the put buyer is out 20 cents and the put seller keeps the 20 cents.

So that’s how call and put options work. You might not know it, but by avoiding options, you’ve been unintentionally sabotaging your chances of having the potential to build wealth by trading in your portfolio.

And there are actually other things you’re doing right now when you trade that making it almost impossible to consistently get ahead in the markets. I call these things the “Profit Killers”, and I’ve identified 7 of them.

But I also developed a free analysis tool that can pinpoint what your #1 Profit Killer is in about 15 seconds. Once you discover what it is, then it’s easy to eliminate it. And once you do that, your chances of winning more trades than you lose can skyrocket, almost immediately.

Go here to discover your #1 Profit Killer and learn how to eliminate it forever.